Recently my friends gathered up their kidlings and we all headed off to the Oakland Zoo.  One of the things the kids wanted to see is the petting zoo, which is perfectly reasonable, but when we arrived we found out that the only animals in the petting zoo these days are…goats.

I tried to prepare myself, I did.  I tried to remain composed around nature’s most perfectly absurd and hilarious animal.  I failed.

There are several times goats have tried to kill me.  Once when driving down the freeway, Chris said, “Hey Sue, look to your right.”  And there it was, a large goat, with a beard and that disproportionately tiny, always disgruntled mouth, standing in the bed of a pickup truck, tethered down with ropes.  I lost it completely.  Then a hand reached up from a man clearly laying on his back beneath this bearded personification of ridiculous and scratched it on its belly.  Just a hand, attached to an arm, attached to a man lying in the bed of a truck.  If the large creature had decided to drop, if it had suddenly laid down, that nice man would have suffocated underneath the belly of a furry, rectangle-pupiled beast, and there is no way in which that is not heart-stoppingly funny.

Another time I was certain it was over, and my friends would have to stifle giggles as they told others how I died, was in Aswan, Egypt.  We were at Abu Simbel taking a break because it is surface-of-the-sun hot there.  So we’re resting on a slab in the shade of other slabs and Chris pointed out a herd of goats.  Chris is a very bad man. We started talking about goat cheese and he begins to wonder what a goat cheese shop would be like.  “They’d be angry because they can’t use the cash register, just banging on it with their goat-hands, *bleating* all mad, then slamming on it again.  When they helped a customer they’d just slam their goat-hands on the display case and *bleat*, then they’d…” I don’t know what he said next.  Between the picture of the cash register scenario, “goat-hands,” and the fact that every time I wrote bleat in those sentences he actually bleated, I scream-laughed and bent double until my face nearly hit my feet.  Several people whipped their heads to see if I was about to die.  I love Egypt very much, it was my life-long dream, but I wasn’t quite ready to be buried in the Temple of Ramses.  Also, Chris is a very bad man.

Last example, we were sitting on the couch, surfing the Smithsonian Archives and Project Guttenberg – or Facebook and Reddit, one of those, when Chris says “This is for you.” and holds his laptop where I can see it and plays…this.  From Sunflower Farm Creamery

If you’re in a spot with slow internet let me tell you that what we have here is a video of tiny goats in pajamas leaping up in the air and running sideways, jumping onto hay bales, and generally being adorable and absurd.  I  mean, why do they run sideways?  Why do they leap and wag their heads?  How can someone be so adorable and so preposterous at the same time?

So you see, a petting zoo full of goats is pretty much the best and worst thing in the world for me.  I explained to my friends my “goat thing” and off we went.  The kids, the human ones, were so well behaved and gentle and generally quiet.  The grey-haired “adult” though, yeah.

Will you please look at this guy?  Will you just take it all in for a moment?

It’s our bearded friend, just laying there being bearded.  I’m mocking him!  Does he care?  Does he have any idea how hard I am making fun?  No!  You know why?  Because he’s a goat and they have no concept of such things!  I mean, no animal does, but still, he looks so smug about it!  This is more exclamation points than I’ve ever used in one article I think!

So while I’m walking away, starting to compose myself, this guy peeks around the corner.  “Hey, you know, what’s up?” 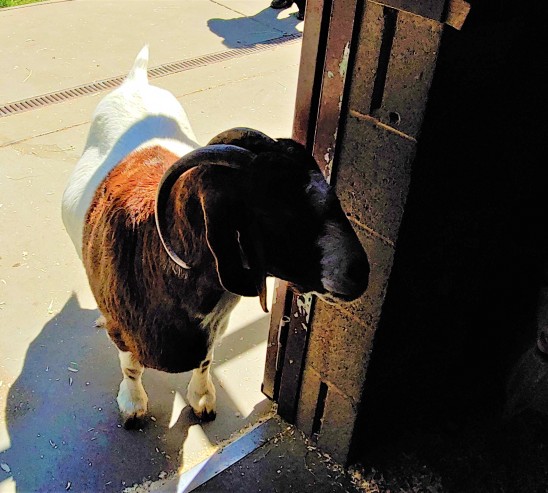 Seriously?  This is what’s happening now?  All I can see is those goat-hands whackin’ at a cash register, the always-annoyed look on his face, and then…he head butts our friend!  Just puts his head down and rams him with his curly horns.  There was no reason!  There was no call for that!  Maybe there was an argument earlier and this brown and white guy was still angry.  Maybe there are unresolved issues from high school.  Maybe the white one deserved it, I don’t know, I don’t know what kind of sordid past these two have.

So that was my day at the petting zoo.  We left, ate at the café, and then went to Aquatic Park.  All the while I am looking at these children with the thought I have frequently…they are more mature than I am, and then I giggle when I see a ship and think of a “dinghy.”

Here is the picture on the front page of this blog.  It is a caption magnet, plus I can hear the “mlep” every time I look at it.  It’s just funny, even if you don’t have my goat thing.

Anyway, several of the last articles have been kind of heavy and hard to write, so I figure it’s time for the laughter part of “Nightmares and Laughter.” And damn if goats don’t make me laugh.

***You know, reading this over, it occurs to me that the three examples above were all initiated by Chris.  If I die suddenly, be sure to show the police this article.  I’m pretty sure he’s trying to kill me, slowly, over nearly 20 years.  He’s a very bad man, but patient.