I live in an older building, built in 1927, which has its quirks and issues. Recently while doing some repairs, the plumbers found the pipes are not up to code, so parts of walls in every apartment have been slowly torn apart to fix it.

One of those is in what’s called the “butler’s pantry,” the small space between the kitchen and the dining room. There’s a built-in hutch and decals of crows and branches on the walls. We like the spooky. (We got this place on pure luck – a hand-me-down from a friend. I always feel compelled to point that out.)

We also love history. This building has a view of the Golden Gate Bridge. It’s called that because it “bridges” the Golden Gate, just a fun fact for you. The people who lived here then could watch it being built.

I would love to see an inside photo of the apartment from around that time. I would love to see how people in 1927 and thereabouts decorated, how they lived, what was new and trendy. I want to know what it looked like, but finding these photos has proven impossible so far. So we painted and decorated it to reflect my beloved 19th Century instead, with additions like a TV and penicillin, and I am left to daydream.

One of the quirks is water leaks so when we noticed the paint was buckled and blistered on one section of the walls we shrugged and went on with our day enjoying indoor plumbing and horseless carriages.

But when the workers cut out part a wall in the butler’s pantry, it caused one paint chip to fall off the wall next to it. My husband peeled it off figuring it will have to be repainted. Then he called me over.

I nearly passed out. Seriously, I gasped so deeply I made myself lightheaded.

Under all that paint, layer upon layer for who knows how many decades, was the most amazing wallpaper. I haven’t researched it yet, so I don’t know when it was put up, but the design looks to be around the 1930s. If anyone knows from the photo, please leave a comment with that information, I will be your very best friend.  Also, I have cookies. 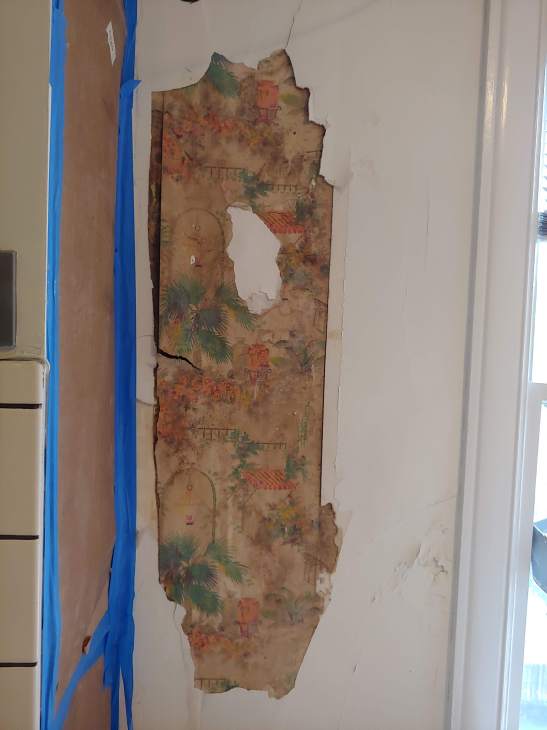 She is a faded beauty, an aged but lovely lady patiently waiting to be unveiled and make an entrance. She is water damaged, faded, ripped and pulling from the wall, but I cannot stop looking at her. Wallpaper is female, apparently. I didn’t realize that either until typing this.

Now my head is swimming. What did it look like when it was new? Did it cover the entire little room? Was the hutch painted white at that time, or had that particular crime not yet occurred, so it was still the bare wood it was meant to be?

These people went to a store, chose that pattern, and had it put up. At that time the building had a dumbwaiter and kitchen so one could order food to be sent up, so I’m assuming they did not do their own work. I imagine a small forest of plants.

What was in the hutch? What dishes did they have? They were likely wealthy so did they have a maid who laid the table?

We are not wealthy, we painted the apartment ourselves. By “we” I mean “my husband.”

I keep going back to look at it, stand back, move close, and touch it with my finger, tracing a line around the palm trees and bridges. It smells musty, old glue and paper and probably mold. It’s a lovely smell, like old books tucked into a proper library. The smell brings so many questions and flights of fancy for me. So much wondering about the people and their lives. Among those lives, my family, going back to the 19th Century. I was born across the Bay, a fact I will forever be bitter about.

Family stories are wonderful, but seeing this relic in my own home, something that, judging by the thickness of the paint layers has been lost for a very long time, it’s like finding a ruin, counting strata to figure out how long it’s been there.

This is how my mind works. This is how I see things. A strip of wallpaper has sent me into a rabbit warren of daydreams and an aching desire for a time machine. But since I don’t currently have one on account of they don’t exist, all I can do is wonder and smile.

Eventually, probably next week, the workmen will come back to patch the holes, and at that time the jig will be up, and they’ll probably have to paint over that spot.

But before they do, we are going to slice that strip of paper out and frame it, and then hang it right in that spot. I’ll walk past it every day and smile since she’s right back where she belongs.

Well, I had finished this article and we sliced out the paper. Lo and behold, there was another behind it! This one was against the plaster, so it is the original. We cut it out too, and they will both be framed. I’ll share that when it’s done. 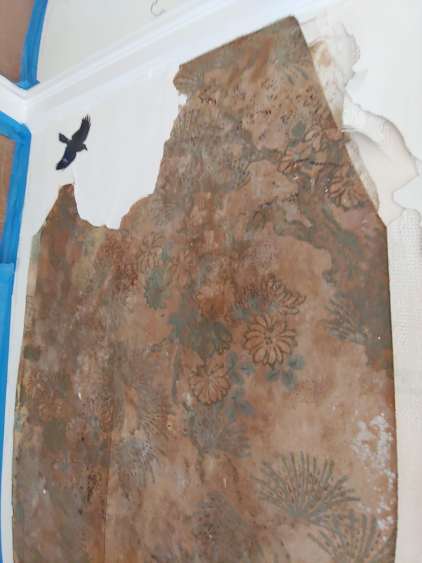